As much as I would like every winter Sunday to be spent lounging around in cozies and cooking something warm that languishes on the stove all day, the reality is that that doesn’t happen very often.  This year, my son’s basketball games are on Sundays and mostly in the afternoon.  This poses a challenge in terms of cooking.  Sundays are the days to make those dishes that you can’t commit to making during the week, but really want to.  We typically clear off the dining room table (mail, laundry etc.) and all sit down to a nice dinner.  This first dish gives you all the Sunday feels, but on a weeknight’s timeframe.

I made this thinking it looked delicious and healthy but also thinking that my children would probably not be into it.  So as we were gathered around the aforementioned dining room table, Brian and I sat there in stunned amazement as they happily chowed down.  I mean they ATE it. No complaining, just eating.  My oldest said he loved this chicken and gravy and he hoped I would make it again.  Sure thing buddy!!  Then my daughter got annoyed at something non-food related, slammed her water cup down sending water everywhere and declaring that we were the worst family EVER! That was the end of our calm family dinner. Do anyone else’s meals end like this??  Please, please tell me yes!!  Anyway, I didn’t change anything about this recipe.  I used the curry powder I had in the cabinet, not the specific kind they suggest.  Here’s the recipe.

Directions
Scoop 1 tablespoon of the cream from the top of the coconut milk. Toss with the chicken, 1 1/2 teaspoons curry powder and a big pinch each of salt and pepper in a bowl. Set aside 10 minutes.

Meanwhile, lightly toast the almonds in a large wide pot over medium-high heat. Remove to a bowl and reserve the pot. Puree the onion, ginger, garlic and half the almonds in a food processor.

Heat 2 tablespoons more coconut cream in the reserved pot over medium-high heat. Add the onion puree and 1/2 teaspoon salt. Cook, stirring, until the mixture is mostly dry, 5 minutes. Stir in the tomatoes and remaining 1 1/2 teaspoons curry powder; cook until softened, 2 minutes. Stir in the chicken and remaining coconut milk and cream from the can. Cover and simmer until the chicken is cooked through, 10 minutes. Uncover and simmer until the sauce thickens slightly, about 5 minutes.

Meanwhile, cook the rice as the label directs. Microwave the green beans in a microwave-safe bowl, covered, until bright green, about 3 minutes. Add the green beans and half the cilantro to the chicken mixture; season with salt and pepper. Serve over the rice; sprinkle with the remaining almonds and cilantro.  (Recipe courtesy of Food Network Kitchen from Food Network Magazine) 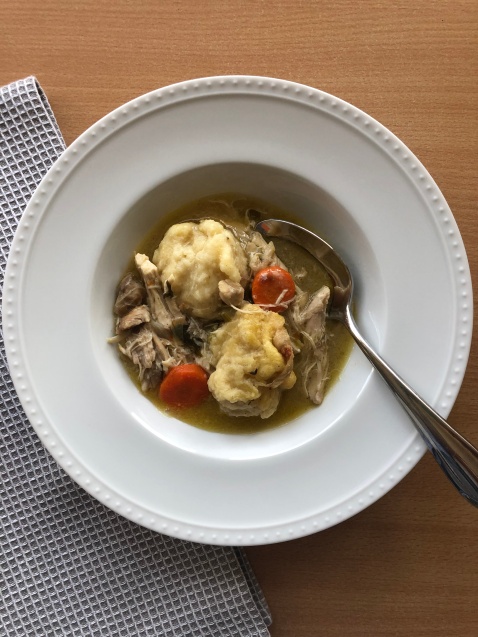 These Chicken and Dumplings from Two Peas & Their Pod is the dish Sunday dreams are made of.  Fluffy dumplings floating in a warm broth filled with chicken and veggies.  I mean seriously amazing.  This dish is more of a time commitment, so perfect for those cold lounging Sundays and totally worth the effort. I did not use the heavy cream as it is optional, and we didn’t miss it at all.  I don’t have a dramatic dinner story for this one, but I am sure we still had to clear all the things off the table!

Make the Soup-Pat the chicken dry with paper towels and season generously with salt and pepper. In a large Dutch oven, heat 2 tablespoons of the oil over medium-high heat. Working in two batches, brown the chicken until golden, about 4 minutes per side. If the pot is looking a little dark on the bottom, splash some water and scrape up any browned bits between batches, and keep those juices with the chicken.
Return all the chicken to the pot and add 8 cups water, the bay leaf, thyme, rosemary, and 1 tablespoon salt. Bring to a boil, reduce the heat to a gentle simmer, and cook for 1 hour.
Strain the broth through a colander set over a large bowl (there should be about 8 cups liquid; skim off some of the fat if you want). Discard the bay leaf and herb sprigs. Using two forks or a pair of tongs, pick the chicken meat off the bones (discard the bones and skin and set aside).

In the same Dutch oven, heat the remaining 2 tablespoons oil and the butter over medium-high heat. Add the onion, carrots, and celery and cook, stirring, until the carrots begin to soften, about 6 minutes. Add the flour and cook, stirring, until all the flour has been absorbed and darkens a bit, about 5 minutes. Add the strained broth, the chicken meat, and the potato, bring to a boil, then reduce the heat and simmer until the broth thickens, about 20 minutes. Stir in the cream, if using. Season to taste with salt and pepper.
While the broth simmers, make the dumpling dough-In a small bowl, whisk together the egg, milk, and melted butter. In a large bowl, whisk together the flour, baking powder, and salt. Pour the wet ingredients into the flour mixture and stir gently with a fork until just incorporated (the batter will be thick; don’t overmix, which could toughen the proceedings). Spoon 1 tablespoon of the batter and use a second spoon to push it off into the simmering soup. Repeat with the rest of the dough. Cover and cook until the dumplings are fluffy and tender, about 15 minutes.
Divide the soup and dumplings among bowls. Garnish with parsley and enjoy! (Recipe from Two Peas & Their Pod)